A sample of 12 delicious Taiwanese food, along with farming and cooking facts 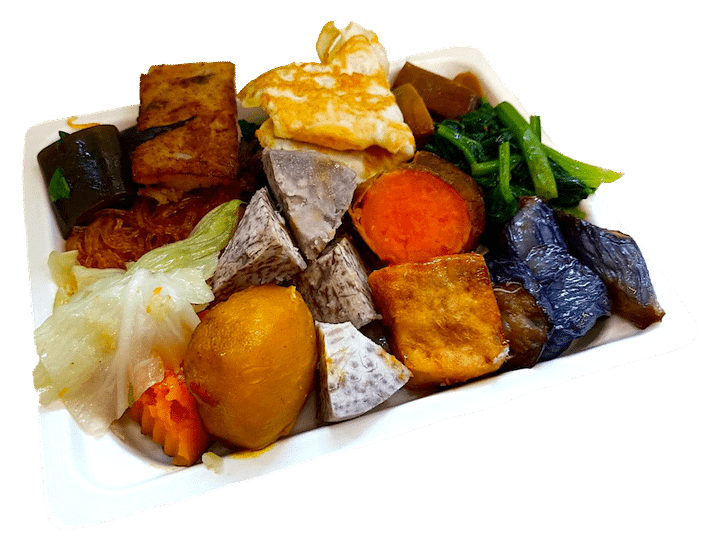 One of the greatest things in Taiwan is food! It is the country with the widest array of food styles I have ever visited.

From local Taiwanese dishes to Chinese and Japanese food, it includes other Asian flavors, adds a bunch of tropical fruits, and revisits Western food.

Here, from a very small sample of dishes I collected on my plate in a buffet restaurant, I propose to guide you through a culinary journey linking eating with farming and cooking!

Taro is one of my favorite discoveries in Taiwan.

Cooked in water, this rhizome becomes so creamy… It is delicious!

In the humid forest of Northern Taiwan, I used to harvest wild ones. It really grows easily like a weed!

I could have spent the rest of my life in the forest, foraging wild taro.

However, this tropical plant is even more prosperous in flooded areas, giving a beautiful tropical touch to swamps or riversides.

Fortunately, some robust varieties, like Pink China, can survive -5℃ (23℉). Then, I plan to plant some next spring, back in France!

Baked, boiled, or steamed. Orange, yellow, white, or even purple. Each kind has its own taste, sweeter or more neutral.

In addition, sweet potatoes are super easy to propagate. Soak a cutting in a glass of water, and roots will appear in just a few days in a warm environment.

In Taiwan, sweet potatoes are perennials. In temperate areas, they are grown as annuals.

Potatoes are less common in Taiwanese cuisine than in Western cuisine.

Well, of course, it is not so difficult to find French fries! And organic farms also grow local potatoes.

This potato on my plate was cooked in a curry sauce. Curry is not so common either in Taiwan, it feels a bit exotic!

As you may imagine, rice noodles are part of many dishes.

But, do you know how we can give such a long and fragile shape to a rice dough that does not contain gluten?

I couldn’t sleep before I found an explanation.

It appears that we need to precook the dough. This way, starch gelatinizes, hence behaving like gluten! Like in this video, in Taiwan. The process for wheat noodles, with gluten, is completely different, as you can see on this other video, also in Taiwan!

When I researched how to eat acorns, I also tried to make acorn noodles from acorn starch, like in the Korean Peninsula. It works very well!

Radish cake is a savory cake made from rice flour and shredded Daikon radish.

To make radish cake, we shred a radish, mix it with rice flour, some water, and we steam the mixture in a mold.

We usually flavor them with small chunks of shiitake, shrimp, or pork.

After chilling in the fridge, we can slice it easily and fry it.

It is very good and is usually eaten for breakfast or snacks. Here is how it is made for street food in Taiwan.

The most common pumpkin In Taiwan is pear-shaped.

But the best we can find, especially if it comes local organic farms, is the green Hokkaido squash.

It is best steamed whole with its skin, becoming very creamy, filling, with a mild chestnut flavor close to the skin.

It originates from Japan and is also grown in some organic farms in France.

In France, cabbage generally feels like an old-fashioned vegetable. In Taiwan, instead, I realized that cabbage is a kind of sacred vegetable.

Do you know that the Taiwanese Mona Lisa is a sculpture of… a cabbage?

A talkative street cook once confessed to us, after a ten-minute monologue just on cabbage: “You know, Taiwanese cabbage is the best, because it stays sweet and crunchy after cooking. This is key.”

Since then, whenever I bite into a Taiwanese cabbage, I think of the Mona Lisa…

Sadly, our lecturer-cook didn’t share the secret to growing such a tasty cabbage!

Usually, in Taiwan, leafy vegetables are eaten cooked, not raw in salads. When we eat uncooked vegetables, they have been pickled or fermented.

The array of leafy greens we can find in shops is much wider than in Western countries. There are sweet potato leaves, for instance.

But a lot is, as you may guess, from the cabbage family — Brassicaceae.

Nowadays, we can commonly find some of them in organic shops in France, like bok choy (小白菜, 青江菜).

Contrary to Western cuisine, in Taiwan, mushrooms are found in everyday dishes.

One of the funniest is the king oyster mushroom.

With its big foot and its small hat, what a strange shape, no?

During a 2-day training about mushroom growing, our teacher explained that Taiwanese indeed prefer the feet of mushrooms rather than the hat. Thus, the mushroom industry has selected this shape.

I have to admit, it is quite tasty: after marinating slices in soy sauce, brown sugar, and black pepper, these fried mushrooms stay crunchy!

Unlike other seaweed types, which are a bit hard to chew, these rolls are soft. Like mushrooms, seaweed is much more common here than in Western cuisine.

This eggplant dish is delicious, sweet and savory, melty.

In Taiwan, eggplant are thin, long and purple. In Europe, I think they are called Chinese or Japanese eggplant.

But the most interesting is that, even though the core of the eggplant is cooked until very soft, the skin keeps its purple color.

While watching videos to learn Chinese cuisine and Chinese language at the same time, I learned that the freshness of the eggplants is key to keep this bright purple color during cooking! But, I still have to experiment, as for me the skin turns black…

I hope you can succeed!

Stinky tofu is the Taiwanese food with the weirdest smell.

For a French nose, I would say it equals the strongest cheeses. It smells like sewage, putrefaction. But, luckily, for a French palate, stinky tofu tastes like a very soft cheese!

Traditionally, to make it, we ferment tofu in a brine containing vegetables, meat and herbs. In 2017, a team of Chinese researchers in food microbiology identified 80 bacterial species and 26 fungal species working together to make stinky tofu!

Usually, when we start experimenting with fermentation, we try not to eat our fermented food if it smells horrible, to avoid intoxication. Well, it seems this rule doesn’t apply to stinky tofu! But our team of microbiologists also adds that, although eating stinky tofu was shown as being safe, it indeed contains molecules, called biogenic amines, which can be harmful if eaten in a too high amount.

In my dreams about a food forest, I would favor perennial plants. But I would keep some patches, maybe a few living raised garden beds, to specifically grow Taiwanese vegetables. At some point, this food forest might become a hotspot for homesick Taiwanese, who would rush from all over Europe to devour organic comforting foods; grown, fermented, and cooked with love ;)