Length and thickness of bamboo internodes: a beautiful curve 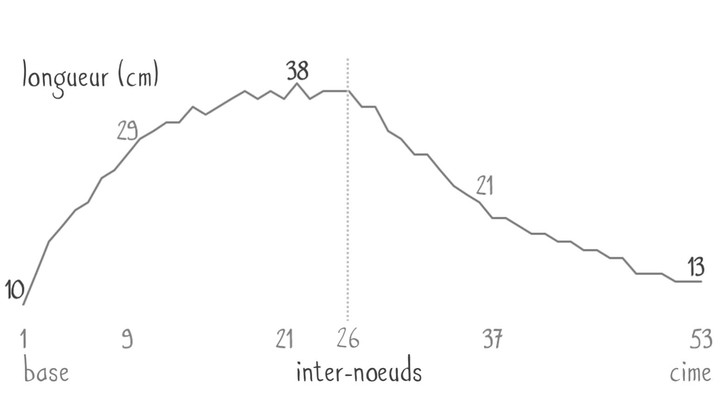 Here is a simple experiment about bamboo anatomy. The measurements are not thoroughly done, hence the results are not yet very robust. However, the first results already show quite an inspiring curve unveiling a beautiful natural pattern!

This post tries to follow the scientific format of research sharing, developed over the last centuries: the use of a simple structure for quick reading (introduction, method, results, discussion), the supply of all the details for anyone to be able to reproduce the experiment, and the supply of the dataset for anyone to reuse the results.

It is part of our Bamboo craft project, where you can find bamboo craft ideas and tutorials.

Bamboo fibers are very straight in internodes and entangled in nodes. Pole walls tend to be thicker at the bottom of the pole and thinner at the top. These kinds of variations have a significant impact on how the craftsman can work with bamboo and what he can or cannot do with the different sections.

For instance, if a craftsman wants to cut a straight strip, its length will be limited by the length of the internode. Moreover, the strips might tend to be thick for an internode that is close to the bottom of the pole, and thin for an internode that is close to the top of the pole. To build our trivet we used for example an internode from the base of a bamboo pole. While for our underwear dryer, a bamboo section with slightly thinner walls — located higher up — was sufficient.

Even if many techniques can be used by the craftsman, for instance straightening the strips using heat, understanding closely the structure of bamboo poles can elegantly save time and energy. The craftsman will know better which pole to harvest for a specific use, and fewer steps and tools might then be necessary to reach the final crafted object. Experienced bamboo craftmen already have this knowledge. But for beginners, trying to understand bamboo by observing it is very useful.

From quick observations, the internodes of a bamboo pole seem shorter at the base and longer at the top; and bamboo pole wall seems thicker at the bottom and thinner at the top. Do these dimensions really follow patterns all along the pole, or are they actually hazardous? What might be the shapes of these patterns? And do these patterns depend on other variables, such as species?

Well, let’s have a look at how internode length and wall thickness vary along a bamboo pole!

We harvested a full bamboo pole in northern Taiwan, and measured the length of each internode using a tape measure. We also measured the thickness of the wall at certain points using a ruler.

We started the measurement of internode length at the base of the pole, above the level of the small roots covering the lower node. The measurement was accurate to the nearest centimeter, due to irregularities in the bamboo pole: the limits corresponding to the nodes were not perpendicular to the axis of the pole, but slightly tilted; and the diameter of the pole tended to be larger at the level of nodes than in the internodes. Measurements are hence not very precise but enough to meet our objectives.

We measured the wall thickness at the level of cuts that we did close to 4 nodes. The measurement was accurate to the nearest 0.5 centimeters. As the wall thickness is not always even, we averaged 3 measures taken more or less at equidistance from one another. Measuring the wall thickness for each internode would be ideal, but it would have required to cut the pole in small sections, preventing us to use it for other purposes that we planned — it is in particular an internode of this bamboo from which we built the trivet!

We also recorded other variables to describe the context of the measurements:

The bamboo pole contained 53 internodes and measured 13.62 m in total.

The internode length was 10 cm at the base, increased till 38 cm roughly at the middle of the pole, and decreased till 13 cm at the top of the pole. Internodes measured 26 cm on average. The visual representation of the measurements suggests two distinct parts: the length of the internodes follows logarithmic-type dynamics in the lower half, then negative exponential-type dynamics in the upper half! So beautiful. Only bamboo can do this, right?

The wall thickness decreased from 12.5 mm on average at the base of the pole to 5 mm at the 14th internode. We did 3 measurements for each of the 4 internodes measured, but some dots are merged on the figure, when values were identical. We can infer a rough statistical model from these measurements, to predict the thickness of the wall depending on the location along the bamboo pole. No data was collected for the internodes after the 14th, but the model suggests a potential wall thickness of about 2 mm for the last internode.

Discussion: do you want to try?

These measurements already help in understanding the anatomy of a bamboo pole. However, the dataset is quite small and restricted to only one bamboo, which does not make for our statistical model to be robust, despite its apparently high R2 of about 0.99.

Improvements could be done thanks to (1) a better measurement technique, as well as (2) additional measurements of bamboo poles in other conditions:

Do you also have measurements? Let us know! By combining our works, we could get more interesting results!

No need to have a complete data set, nor all the complementary variables. We can perform interesting analysis even with missing data.

Then you will likely enjoy our newsletter where we share our latest posts and explorations! You will discover there our research and experiments on a variety of topics such as, bamboo crafting, gardening, health, spirituality, traveling, and more.

We do not share or sell your data, and you can unsubscribe at any time.